Voting season is upon us once again and although I don’t do a lot of political posts, I felt I should do one now.

I would like to start by saying that if you are not already registered to vote, do it now.  Voting is important and it is one of the ways we get to have our voices heard.  And as so many people have pointed out prior to me, if you don’t vote, you don’t get to bitch.  Basically, this means that if it is not important enough to you to go to a polling place every few years, then you are in no position to complain about the government.

I know someone who does not vote and I asked one time why that was.  Their reply was that they have never found anyone worth voting for.  My reply was that there are plenty of people to vote against.  Now, I can see their point.  Long gone are the days of Teddy Roosevelt and John F. Kennedy.  I have a feeling we may never encounter another candidate of their caliber again.  But is that any reason to sit back and watch things disintegrate as a passive observer?

My point in bringing this up is that we are in the midst of a crucial competition for the presidency of this country.  On the one hand, we have a candidate who is trying to repair eight years of disaster upon disaster.  His progress has been slower than I would have liked but at least there is movement in the right direction. 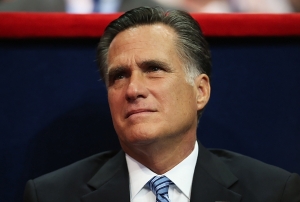 Please note there is no symbolism in the fact that Romney’s picture is on the far right of this post. 😉

Then on the other hand, we have a candidate who not only looks out for himself and his kind (the uber-rich) he wants to send this country marching backward into the 19th century – where women have no voice and no rights and the little guy is filthy, poor and hungry in the streets.

It is important to me as a woman and a student of history not to go back to those days.  But even if those nightmarish days were upon us once again, one thing this country has always stood for is separation of church and state.  So how can any American with a fifth grader’s understanding of the Constitution allow a man who adamantly believes that he has magic underwear run this country and to do so according to those beliefs?  Now, don’t get me wrong.  You are allowed to believe whatever you choose.  But you are not allowed to impose it on the entire country.  If Obama follows a religion I couldn’t tell you what it was as it – rightfully so – rarely comes up. 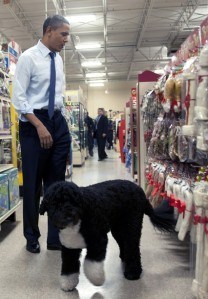 The last point I would like to bring up is that the Obamas are human.  They eat out and take their dog Christmas shopping at PetsMart.  Meanwhile, Romney cannot understand why you are not allowed to roll down the windows in an airplane; and  he cannot even visit our closest ally without insulting them.
You do not need to be a Mensa member to figure this one out.