If you were to ask a group of people what they thought Africa’s deadliest animal was – not including insects – you will probably get a diverse group of answers from reptiles like the Puff Adder, Crocodiles and the Black Mamba to mammals like Lions, Elephants and Rhinos.  But not many people know that the actual culprit is the Hippopotamus. According to statistics provided by the African Wildlife Foundation hippos kill nearly 3,000 people every year.

Hippopotami (Hippopotamus amphibious) are known to be aggressive and unpredictable while exhibiting fear of nothing.  They have been known to attack and kill crocodiles.  One report from 2009 was featured on the Telegraph’s web site.  A 1974 issue of Science Digest featured an article entitled “The Dangerous Hippo” by George and Lory Frame that stated:

“Nearly all of the famous African explorers and hunters–Livingstone, Stanley, Burton, Selous, Speke, DuChaillu–had boating mishaps with hippos. All considered the hippo to be a wantonly malicious beast. Not long ago Spencer Tyron, a white hunter, was killed while hunting near the shores of Lake Rukwa, Tanzania. A bull hippo turned over the dugout canoe from which Tyron was shooting, and bit off his head and shoulders.” 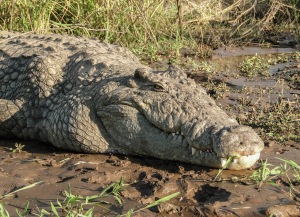 A Nile crocodile on average can reach 13 – 16 feet in length and weight 0.45 ton (900 pounds, 410 kilograms).  However, it is considered “not uncommon” for crocs to reach 20 feet and 1 ton (2,000 pounds, 900 kilograms) but was seen more in the 40s and 50s prior to severe hunting.  The Nile crocodile (Crocodyus porosus) is second only to the Saltwater Croc in size and aggression.  The crocodile is considered to be a more opportunistic animal than the hippo and carry a death toll of up to 200 a year.

The gnu, or wildebeest, is an antelope that can weigh between 0.32 ton (639 pounds, 290 kilograms) for males and 0.29 ton (573 pounds, 260 kilograms) for females.  Males reach a height 150 cm (4.9 feet) at the shoulder and females stand about 120 cm (3.9 feet).  The yearly death toll they cause is minimal to nonexistent (mostly stupid people keeping them as pets or freak accidents). So what can happen when you put all three together?  Something amazing. The Daily Mail reported on March 11th about a rarely seen event.  While on safari in the Masai Mara game reserve in Kenya in 2011, photographer Vadim Onishchenko was able to capture on film a group of hippos (known as a bloat) rescue and protect a gnu from a crocodile.  One of the largest hippos is even seen nudging the gnu to encourage it to move out of the water.  Onishchenko said:

“It was an incredible moment, the hippo actually tried to push it out of the water and then guarded the gnu to prevent the crocs getting close. . . . Even our safari guide was stunned by the hippos behaviour, he said he had never seen anything like it before.” 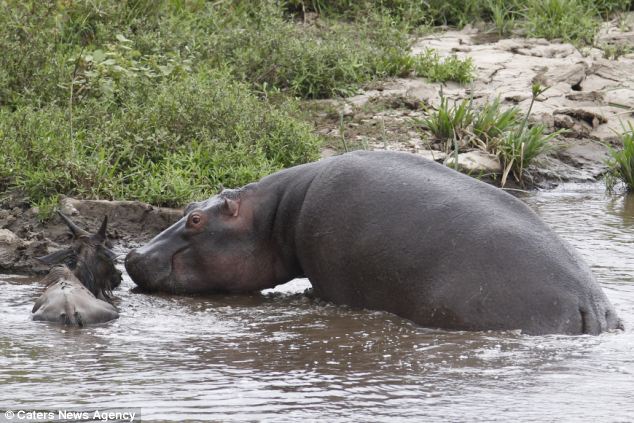 Onishchenko filmed the scene for more than two hours.  And if you watch the video below at about 45 seconds in, you can see one of the hippos stomp on the crocodile in order to get it to let go of the wildebeest. The wildebeest did make it ashore with Onishchenko saying:

“We saw the gnu escape the water but it stood there for quite a while as I think it was in shock. When we left the animal was still ashore and seemed uninjured but we had to leave as it was getting dark.”

I can guarantee the gnu did not escape unscathed (as I have some first hand experience with an alligator and he was a baby!).  But I hope his injuries heal and have no ill effects except for giving him a little extra wisdom.