Most people do not understand Bipolar Illness and even if they do, they can have no clear concept of what it is actually like unless they either have it or live with someone who does.

Bipolar Disorder is defined as follows: “also referred to as bipolar affective disorder or manic depression, is a psychiatric diagnosis that describes a category of mood disorders defined by the presence of one or more episodes of abnormally elevated energy levels,cognition, and mood with or without one or more depressive episodes.”  This is a complex definition and I hope to break it down a little for you.

According to the DBSA (Depression and Bipolar Support Alliance) – “Depression and bipolar disorder (also known as manic depression) are both highly treatable medical illnesses. Unfortunately many people do not get the help they need because of misunderstanding the issues surrounding the illnesses or the fear associated with stigma.”  I also need to add that even if you go to the doctor with symptoms it is sometimes overlooked and a diagnosis is given as something other than Bipolar.  I was not diagnosed until I was 21.  And even then I don’t think I would have had it checked out if it wasn’t for taking a psychology class.  It was the first time I was ever able to see all my symptoms laid out in one place – with one likely cause.

The DBSA goes on to explain: “Bipolar disorder differs significantly from clinical depression, although the symptoms for the depressive phase of the illness are similar. People who have bipolar disorder talk about experiencing mood shifts. These swings can be severe, ranging from extreme energy to deep despair. These mood shifts disrupt normal life activities distinguish bipolar mood episodes from ordinary mood changes.  The shifts may be mild ranging from sadness to irritability or restlessness.”  I would like to add here that the shifts of mood can be very rapid.  Personally, I have experienced times when all was well and then as if turning on a dime I was in a rage.  Another aspect that people do not understand is that the “manic” phase(s) do not necessarily mean happy, laughing or the life of the party.  It can manifest itself as violence or rage.

Here is a small list of symptoms for both the manic and depressive phases.  If you know someone, or you yourself, experience these symptoms – please seek medical attention.  It can be controlled.  It may take time to find a treatment that will work for you, but it will be well worth it as you will see (and feel) the improvement.  I would also like to extend the offer to be available via comment or email should you wish to speak with me about my personal experiences living with Bipolar Disorder.

Symptoms of mania – the “highs” of bipolar disorder

Symptoms of depression – the “lows” of bipolar disorder 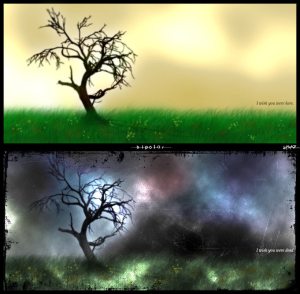